Car Hire in Heraklion to see the capital and the largest city of Crete. The port of Heraklion is the largest of the Cretan island. Heraklion is the base of Decentralized Administration of Crete and the base of Region of Crete. In addition Heraklion is the base of Cretan Church and the Archbishop of the city is the Archbishop of the island of Crete. The city of Heraklion is famous for the resistance and the heroism its people showed during the German invasion and “The Battle of Crete” (as it has been mentioned in global history) in 1941 and was honored with the War Cross A’ Class. According to the census population of 2011, Municipality of Heraklion has 173,993 citizens. The main economic sectors of the city are tourism, agriculture and trade (of Mediterranean). Heraklion has industrial area 4km. southeast from the center of the city. Heraklion International Airport “Nikos Kazantzakis”, is one the busiest airports of Greece. It is estimated that during the summer of 2014, there were about 10 million tourist arrivals from all over the world in the island of Crete and most of them arrived via Heraklion Airport, to begin exploring the mysteries and the beauties of this extraordinary and magical place. Car hire in Heraklion from Mythos Car Rentals|Crete Rent Car.com  and we guarantee you do the same.

Car hire in Heraklion to visit sightseeings inside the City 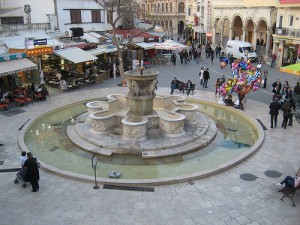 Car hire in Heraklion to visit Other Sightseeing