Skip to content
Home » Rent a Car in Crete and explore the island!

Rent a Car in Crete ! 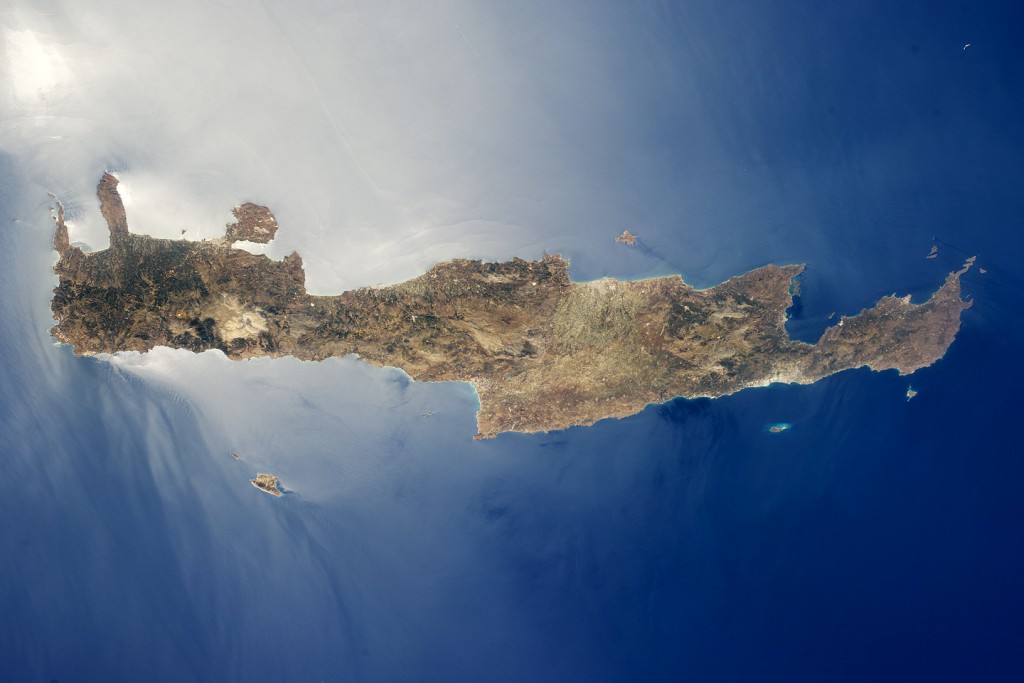 Rent a car in Crete is essential to explore the beauties of our island, learn about its history feeling free to drive to any destination of your desire. Our goal in MYTHOS Car Rentals, is to help you accomplish to maximize the experience of your visit in our island with a car that suits you.

Crete is the largest island in Greece and the fifth largest in the Mediterranean. During the years 3000b.c.-1400b.c. one of the first civilizations of Europe, the Minoans, flourished on this island. But the history of Crete goes more back on. With a population of more than 600.000 citizens, Crete consists a very important part of the economical and the cultural legacy of Greece. Every year becomes the destination for millions of tourists.

…and drive to Knossos, the Minoan palace, is located 5 kilometers southeast of Heraklion and consists the most famous landmark of Crete.  Minoans flourished during the years 3000b.c. – 1400b.c. and became the rulers of the Mediterranean trade. It was built two times and destroyed both of them. The first time the volcano in Santorini exploded and the tidal waves were catastrophic. The second time it was destroyed by fire. The myth says that the legendary Minotaur used to live in a labyrinth inside the palace. The marvelous architectural plan, the use of rare luxurious materials, the advanced techniques of construction and drainage system and the massive size of the palace make it, even today, the most amazing sight in Crete.

…and drive to the newly renovated Αrchaeological Μuseum of Heraklion. It is  one of the most important museums of Europe. It is placed in the center of the city of Heraklion. During the Venetian domination the Catholic Monastery of St. Francisco was housed in the same position.A catastrophic earthquake in 1856 destroyed the monastery which was one of the wealthiest and most important monasteries of Crete with magnificent Byzantine frescoes. In 1870 it was built again and in 1898 it was burnt by the Turks. The reconstruction began in the beginnings of the 20th century and was completed by 1940 to be preserved until today. The museum exhibits findings from the Neolithic period (5000b.c.-2500b.c.) until the Meta-Palatial period (1400b.c.-1100b.c.). The findings of the Minoan civilization were brought to us by Minos Kalokairinos and Arthur Evans, as well as many other traditional architecture and historical material from the ancient period of Cretan history.

Spinalonga, also known as the Leper island,  is a small island that you will find in east Crete near Elounda. Rent a Car in Crete and drive your way to Elounda, Plaka or Agios Nikolaos and take from there the boat to get on Spinalonga. Spinalonga was not an island until the Venetians in 1526 cut a canal through the mainland. Afterwards they built a fortress on it. The name Spinalonga comes out paraphrasing the Greeks who where saying “stin Elounda” meaning “to Elounda”. “Spina longa” in the Venetian language means “long thorn”. It was the last fortress to fall in the hands of Ottomans in 1715, the last battle between Venetians-Ottomans. The Cretans had also hard time conquering Spinalonga from the Turks. The revolution began in 1878 and only the 1903 that the last turks left the island. During the years 1903-1957 Spinalonga was used as a leper colony. Today, many years later, Spinalonga is inspiring novelists and filmmakers with its existence.

…and drive South of Crete,75 klm. from Heraklion city, in the bay of Messaras and find the beach of Matala. The characteristic carved caves are made from the Neolithic age. Opinions differ if they were houses or tombs although some of them have “windows”. The myth says when Zeus seduced Europe in the form of a white bull, brought her to the beach of Matala. As a harbour it has been used since the Minoans for the palace of Phaistos. In later years it was in the hands of the Romans and the Gortynians. It is mostly known for the hippies who moved in the caves in the 60’s and 70’s. The singer Joni Mitchell in 1971 sings the song “Carey” inspired by her experience on this marvelous relaxing beach. Every year in the summer a big festival takes place in Matala attracting people of all ages to enjoy 3 days living as the “flower children” did.

… and drive to the south central Crete, 62 kilometers from Heraklion to the Minoan palace of Phaistos. Phaistos is the second most important Minoan city after Knossos and today is an archeological attraction with thousands of visitors daily. It was built in 2000b.c. to be ruined by the same earthquake that ruined Knossos in 1730b.c.. The second palace was built over the ruins of the first one to be more luxurious and majestic. Radamanthys, son of Zeus and brother of Minoas was the first to reign in Phaistos in 2000 b.c.. On the left you see a picture of the Disk of Phaistos which until today is intriguing archeologists from all over the world about its meaning and its importance.

…and drive to the area of Sfakia on the south coast of Crete, to Frangokastelo. Frangokastelo is a small settlement with restaurants, cafeterias making it an ideal destination to visit. The Venetian fortress was first built in 1371 and reformatted in the 19th century to its latest form. There is a myth who says that every year between the end of May and the first days of June, just before the sun rises in a place called Thyme Kampos in Sfakia, Drosoulites make their appearance. Drosoulites is an army of dead warriors with shiny armor marching towards the sea of Frangokastelo. It is said that Drosoulites are Hatzimichalis Ntalianis with his warriors who defended the castle from the Ottomans with their lives. 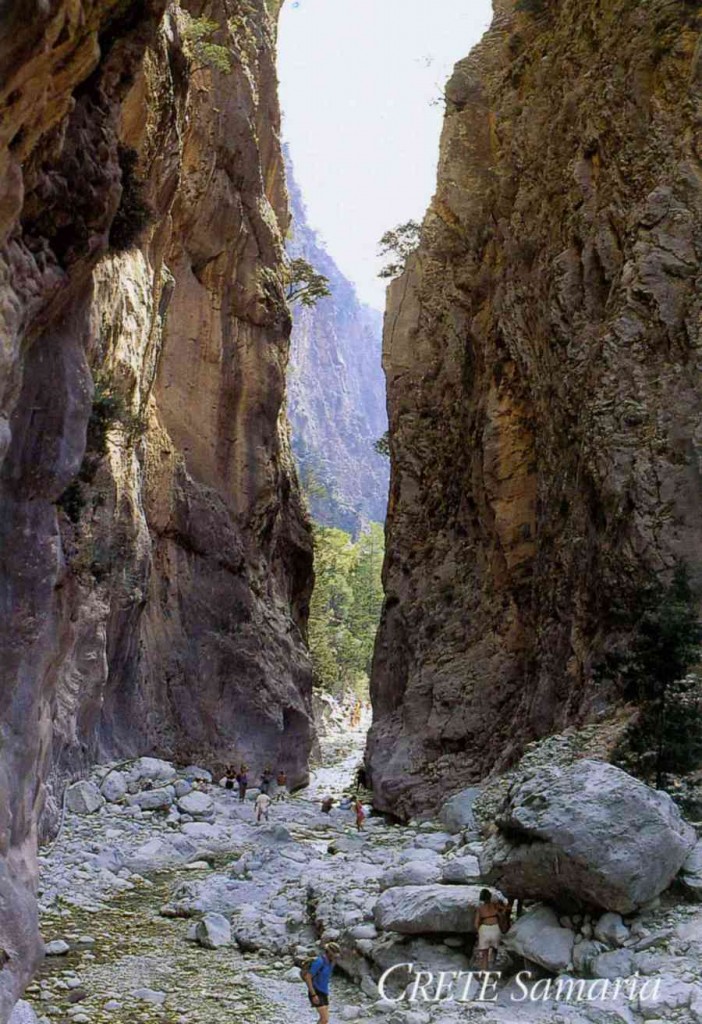 Prepare a good pair of shoes for this one! Samaria is 16 km long wich makes it the longest gorge in Europe.The time you need to cross it is about 5 to 6 hours of hiking. Samaria begins from the area of Omalos and in an altitude of 1250 meters and ends in the south west coast of Crete, close to the village Agia Roumeli. The narrowest part of the gorge is called the Iron Gates, where the width is 4 meters and the height reaches the 300 meters. There is a village that you will find half way inside the gorge with the name Samaria. Its last inhabitants left in 1962 so that the gorge can become a National Park. Samaria is the home for many rare plants and animals. One of them is the famous kri-kri, a very rare kind of goat that lives in the gorge. Thousands of people visit Samaria every year making it the most visited footpath in Greece, with the mount Olympus to be the second. Take the chance and explore the nature of Crete with Rent a Car in Crete.